An Un-pho-gettable Taste: Is Pho Gluten-Free? 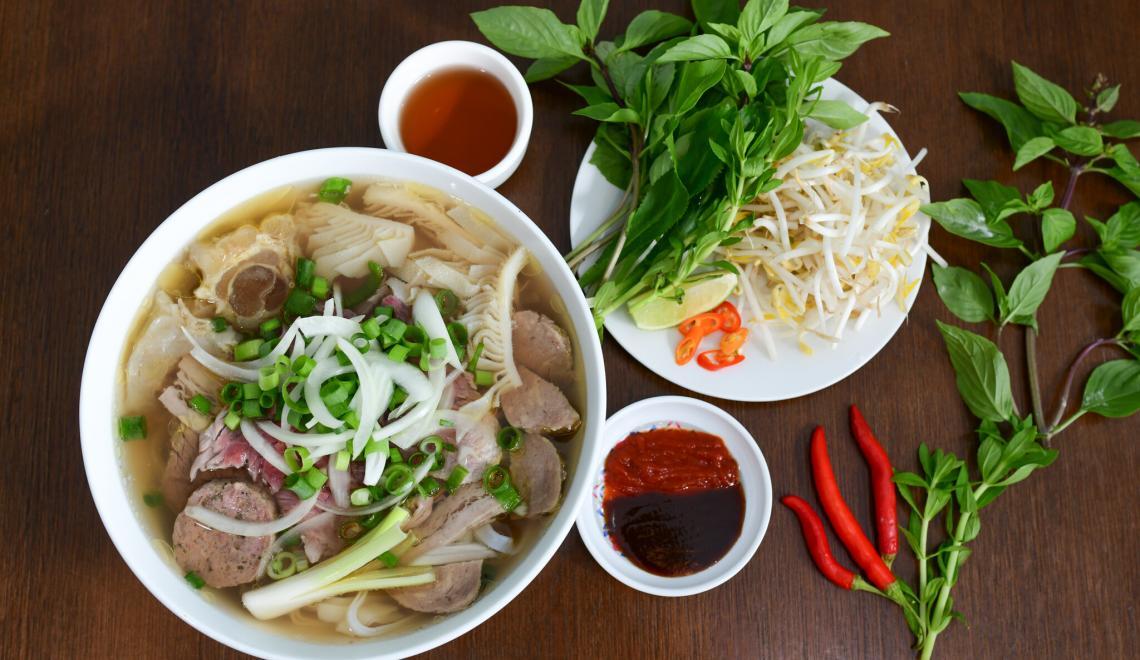 There is a reason Vietnam’s unofficial signature dish is well-loved all over the world, available from Montreal to Melbourne and Moscow. I don’t know what you think, but I’d believe it immediately if someone tells me that a steaming bowl of fragrant pho possesses all the magical properties, including curing disease, hangovers, and restoring the body’s balance.

Although all soups are wonderful, especially in the colder months or on a rainy day when you desire nothing but the warm sensation in your stomach, pho outshines all those other soups since it is great for summer as well. While it does have that hearty broth that can get you through a thousand winters, this broth is also light enough to tide your hunger over in the summer.

Who are we kidding, though? How can one say no to that exquisite flavor in any weather, even if the temperature does kind of bother them? Well, people with celiac disease or those who wish to eliminate gluten from their diet might hesitate, as long as they don’t have the answer for the question: Is pho gluten-free?

Don’t worry, I’m here to clear the confusion. In this article, let’s take a trip to Vietnam and discover some interesting facts about this one-of-a-kind dish!

An Introduction To Pho: The Humble Soup That Caused An Outrage

Even before dawn, we can see pho stalls set up shop along the sidewalks. Surrounded by clouds of steam, the cook will assemble each bowl at a time. The boiling broth is poured over a bed of soft rice noodles and thinly sliced meat, and topped with a handful of chopped herbs and chives. Each diner will customize their bowl to liking, with squeezes of lemon, slices of red chili, and sprigs of basil. It’s an experience no trip to Vietnam is complete without.

While most historians suggest that pho was invented in northern Vietnam (precisely Nam Dinh/Hanoi) during the late 19th and early 20th centuries, its exact origins are murky. It is often believed that the term “pho” actually came from “feu” – which stands for “fire” in French – and that the local Vietnamese was inspired to create the dish after learning about French’s classic beef stew, or “pot au feu”. However, some say it was from the Chinese communities who settled in the north of Vietnam and sold a dish called 牛肉粉 (beef with noodles). The Chinese character for 粉 (pinyin: “fěn”) is pronounced “fuh”, which is similar to the Vietnamese “phở”.

According to New Zealand-based Vietnamese chef and culinary writer Alex Tran, the history of pho might be a mix of the two. “Rice noodles and other spices used in making the broth undoubtedly have a connection with Chinese people in the north. However, beef is not the daily meat of the Vietnamese as we use buffaloes for farming. Only under the French colonial regime did the consumption of beef start to appear and bloom.”

Leaving aside the etymology, French “pot au feu” can give you a glimpse of what pho really is. The term refers to the primary cooking process, which is the long hours required to prepare pho’s French predecessor.

As mentioned, prior to the French colonization of Vietnam, local Vietnamese did not butcher cows for food. However, as the French arrived, the Vietnamese began slaughtering cows to cater to French tastes. Additionally, they used the marrow-rich, cartilaginous bones to make the broth that was the soul of both pot au feu and pho. In fact, the first step in making pho is to simmer the bones in a pot of water for several hours.

That said, during the early 20th century, the Vietnamese had a newfound appreciation for meat. The street vendors that served noodle soup leaped at the chance to experiment with it, and they started off by selling a soup consisting of water buffalo meat and rice vermicelli, which quickly became popular. This is how the original pho, or you can say “pho of the north”, came to be.

The Vietnamese dictionary officially recognized pho in 1930 as a noodle soup with thinly sliced beef. It was around the time that roaming vendors shouldering mobile kitchens on bamboo poles had become a common sight in the streets of the Old Quarter. Following the natural competition among cooks, the dish went through some impactful changes. Around the ’40s, local chefs began substituting chicken for beef. Although the switch was met with skepticism, people eventually got accustomed to the variation, and eventually, it was fully embraced.

Nowadays, pho has been entwined with the Vietnamese national psyche. Just like how poet Tu Mo noted in “An Ode To Pho”, the subtle flavor of the soup and its egalitarianism is loved by rich and poor people alike.

As the colonial period came to an end, Vietnam was divided into the South and the North. Following this, around one million northern citizens migrated towards the south, bringing the pho culture with them. Due to the environmental differences between the two regions, this migration was vital in shaping the evolution of the dish.

On r/pho (yes, there is a whole subreddit for this!), Vietnamese users point out that northern pho is saltier with a stronger beef aroma and taste. Like user “thy_tran” wrote, it has a purer approach to ingredients. Meanwhile, the south is more agriculturally rich, so southern pho would include a wide range of herbs such as Thai basil, bean sprouts, fermented beans. It is also sweeter with the use of rock sugar.

The table below highlights the key differences you will find between the Northern and Southern pho soup:

In the late 20th century, Saigon was overthrown by the North at the time of the Vietnam War. Following that, a large number of Vietnamese migrants fleed their homeland in search of a better future. As they made their new home in countries like America, France, or Australia, they introduced their beloved dish to international connoisseurs. That said, it will be easier to find southern-style pho here in the US.

Still, the fact that each region has its own preferred take on the ingredients proves that pho is not only a Vietnamese national dish but also a matter of fierce local pride and contention.

Whether northern or southern pho is your favorite, if you have celiac disease, gluten sensitivity, or such health problems, you might still be wondering, ‘Is pho gluten-free?’.

Well, this might turn out to be more complicated than you think. Behind the (deceiving) simplicity of this popular Vietnamese soup are multiple ingredients, so let’s go through each “layer” of this dish and discuss whether or not it’s safe for a gluten-free diet!

Dealing with food allergies? This guide on Chick-Fil-A foods will help you take better care of yourself!

Pho noodles (or “banh pho”) are flat noodles made from rice flour. The noodles on their own do not contain gluten, making them safe to enjoy for those following a gluten-free diet.

However, the same thing is not true for vermicelli – another staple in Vietnamese and Southeast Asian cuisine in general. While pho noodles are prepared from rice flour, vermicelli noodles are made from wheat flour. This means they do, in fact, contain gluten. If you are on a gluten-free diet, any dish with these noodles (such as bun cha or fresh spring rolls) is what you should avoid.

Herbs And Vegetables In Pho

Both northern and southern pho contain a wide range of herbs, but you don’t have to worry about them. All fruits and vegetables and naturally gluten-free, as long as they are plain and are not coated in a sauce, breading, or seasoning.

Is Pho Gluten-Free – The Meat

Just like vegetables, meat is gluten-free with little seasoning as possible. All the meat (including chicken and beef which are often seen in pho), fish, and seafood are all naturally gluten-free, as long as they are not marinated, breaded, or cooked with a sauce.

That said, it is safe for you to enjoy plain meat in pho. In some stalls or restaurants, you will see the dish being served with poached eggs, which is safe for you as well. Unlike some assumptions, eggs are not a dairy product. They are completely free of gluten and can be found in many dairy-free recipes, so you can consume them without worries.

This is where things get tricky. Traditionally, the cook will make the broth by simmering chicken or beef bones. Following this method, the broth will be completely gluten-free and safe to consume.

However, some restaurants might add fish sauce or beef stock to the broth, which can both contain hidden sources of gluten. In case you wonder, ‘Is fish sauce gluten-free?’, the answer is not all of them. While most fish sauce available on the market doesn’t contain gluten, some of them have wheat listed as an ingredient, so it is crucial to check the label carefully before purchasing yours.

Still, it is possible to enjoy a gluten-free pho. You can prepare this delicious dish at home or make sure that the restaurant you are visiting can accommodate a gluten-free diet with gluten-free ingredients.

Vietnamese Culture In A Bowl

Now that you’ve found the answer for ‘Is pho gluten-free?’, I hope that encourages you to go on, try a bowl, and see how beautiful this classic Vietnamese dish is. While a street vendor in Vietnam will provide you with the most authentic experience, you can be assured that no matter where you are in the world, you will be able to find a steaming hot bowl of meat broth and noodles that has a history as rich as its taste.

Do you want to check out the latest food-related content? Head to our Homepage for more!