Can You Eat Raw Shrimp? Here Is Your Tasty Guide For A Tongue Orgasm 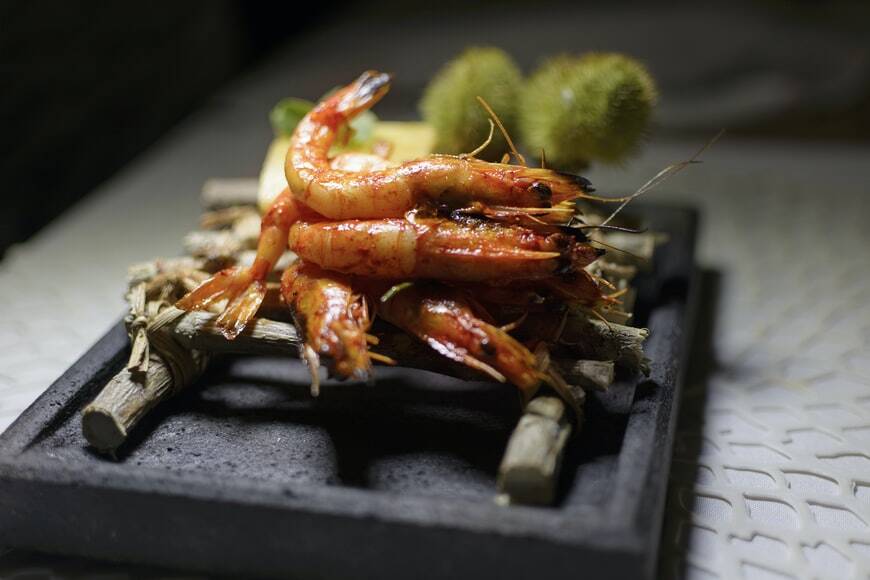 Hey seafood eaters, what does shrimp taste like to you?

This might be the question you come for! The idea of eating something raw can seem quite daunting to those who grow up with cooked food culture.

However, raw food is not that bad at all! Once it clicks with your tongue, you might become obsessed!

In the world of raw cuisine, raw shrimp is one of the most favorable! If you ever watch Mukbang videos on Youtube, any video with the title ‘eating raw shrimp’ has millions of views!

But knowing its popularity does not mean everyone has the gut to swallow raw shrimp right away. If you have never given it a try and are still wondering “Can you eat raw shrimp?”, below we provide a detailed guide on how to enjoy this unique dish.

How Does The World Eat Raw Shrimp?

Many cultures worldwide consider raw shrimp, especially the hepatopancreas (the liquid inside their heads) as a delicacy in their culinary world.

When thinking about raw shrimp, the first country that comes to our mind might be Japan with the famous raw shrimp sashimi. Live shrimp are often peeled, dipped in wasabi sauce, and then eaten.

In China, there is a dish called drunken shrimp, in which people douse the prawn in a liquor called baijiu.

Can You Eat Raw Shrimp?

It really depends on your health and your food taste. Not everyone can eat raw shrimp because some might feel nauseous when they eat raw food.

But if you are a foodie and want to try out everything, plus you are a healthy individual, there is properly no problem with eating raw shrimp.

Shrimp is rich in protein, omega-3, omega-6, and iodine which is necessary for thyroid function and cognitive health. The antioxidant astaxanthin in shrimp can help to prevent wrinkles and lessens sun damage because it can protect your cells against damage.

However, raw shrimp can carry harmful bacteria and viruses that make you sick. One of the popular sicknesses is vibriosis – caused by a bacteria named Vibrio, which is quite commonly found in sea creatures. When you have vibriosis, you might have symptoms like diarrhea, nausea, abdominal cramps, headache, vomiting, and fever.

People with compromised immune systems, such as pregnant women, should be careful with raw and undercooked shrimp.

How To Cook And Eat Raw Shrimp Safely?

The process of cooking and eating raw shrimp requires you to pay attention in every step to make sure that it is safe to consume.

What Kind Of Shrimp Can We Eat Raw?

How To Choose The Best Raw Shrimp?

You should purchase prawns from trustworthy restaurants and markets which guarantee cleanliness and safety. Raw shrimp that has already spoiled will have sour, rancid, or ammonia-like odors. If the package shows signs of ice crystal or frost, that means it has been kept for so long already, you should avoid eating raw to avoid being sick.

If you don’t live near the sea, the shrimp at the supermarkets are mostly not fresh but you actually can buy them frozen or thawed. When you see the label “fresh frozen” on the product, that means the seafood was frozen when it was fresh, just right after the harvest.

How Long Can Raw Shrimp Stay In The Fridge?

FDA (Food and Drug Administration) has given guidelines for how cold and how long can raw shrimp stay in the fridge:

How To Prepare The Raw Shrimp?

It is recommended that you clean the raw shrimps properly under running water to wash away dirt and bacteria present on the surface. You should find alcoholic sauces that go well with the prawns and kill the bacteria inside them. You can also use acidic marination to get the bacteria away, however, bear in mind that it won’t kill 100% of the bacteria but only minimize the risks of being sick.

Are you curious: How many Oreos are in a pack?

Besides raw shrimp sashimi, raw shrimp ceviche is a quite popular dish for raw food fans.

Ceviche simply means “cooking’’ raw seafood by soaking it with lime juice for hours. It is a quite fast, easy, and enjoyable dish with a naughty taste.

If you love to eat raw shrimp yet do not have much time to make it, this recipe is perfect for you! Let’s get to the kitchen and try it out!

Step 2: Put 1lb of shrimp in a bowl, then pour some warm tap water in, and let it thaw for 10 minutes.

Step 4: Cut small shrimp into small pieces, about half length-wise for small shrimp and 4 long stripes for large shrimp.

Step 5: Then squeeze lime juice over diced shrimp in a bowl and stir the mix.

Step 6: Put it in the fridge for two hours and let the lime juice ‘’cook’’ the shrimp until it is pink and opaque. Then your shrimp is ready! Combine with other ingredients to make yourself homemade ceviche.

We hope that after reading this article, you will be able to answer the question “Can you eat raw shrimp?”. It is a notorious dish that can be intimidating. However, once you try it with a proper amount of sauce, you will get obsessed!

Much to the delicacy of raw shrimp and raw seafood in general, it is worth reminding that you should not eat too much of it, like on a daily basis. As alcohol and limes can kill the bacteria, they cannot kill 100%. Therefore, consuming sometimes for the joy of eating good food is a smart choice.